We might catch moths flitting around the night’s sky or a fire, but why don’t they join butterflies basking in the sunlight? From their tiny scales to ultrasonic hearing, read on to discover the differences between moths and butterflies. Admit it: you don’t really know.

But seriously, what actually is a moth?

You probably won’t be too shocked to learn moths and butterflies are pretty darn similar. In fact, they belong to the same group of flying insects called Lepidoptera, translating as ‘scale wings’ in Greek.

However, it’s likely both species didn’t emerge at the same time. Butterflies are considered to have evolved from moths, originally existing as the diurnal – or daytime – equivalent of moths. The colourful butterflies we see evolved much later after flowering plants came into existence.

Both moths and butterflies are actually in the final act of a four-stage life cycle that Lepidoptera share. This cycle begins with the egg, passes through the caterpillar (larva) and the chrysalis (pupa) stages, and finally ends with the adult stage, generally called the imago, which can be either a butterfly or a moth.

Moth caterpillar cocoon – the making of a moth

One of the main differences starts before the moth has even emerged from its cocoon.

Although some caterpillars stick to the ground, burrowing into the soil for their transformation, generally they form a cocoon. The type of cocoon a caterpillar builds for its metamorphosis helps us predict if it will be a butterfly or moth.

A moth caterpillar fashions its silky cocoon using a glue-like substance which they spin around them once hanging from a tree branch or leaf. Moth caterpillars have special glands which start producing this sticky substance in preparation for its metamorphosis.

Silk worm caterpillars in particular rely only on their own silk, knitting a shell around themselves. Other moth caterpillars use parts of leaves to create a patchwork cocoon.

While butterflies emerge the more elegant insect, they create their cocoon (or chrysalis) by shedding an extra layer of skin and use their own body to create a hard shell.

Why are moths attracted to light (and why aren’t butterflies)?

Generally moths are nocturnal insects, so we’re used to seeing them darting around lightbulbs or fires outside.

Unlike Icarus, these creatures aren’t newly excited about their flying skills – they’ve been at it for hundreds of millions of years now. Instead, they may be using the light for navigation. “At night, light conditions are very different from those in day times. Moth did not evolve in times with street lamps,” says Professor Doekele Stavenga, an insect vision and colouration researcher.

There is not one clear answer yet, but many think that moths mistake artificial lights for the Moon and are drawn to them for this reason. However, they may stay bouncing around your lampshade because they become disorientated by the light once they are close.

So, are moths drawn to a flame (or lightbulb) doomed to keep dying? A group of researchers tested the impact of light pollution on moths in 2016, and found city moths were less likely to display this flight-to-light behaviour, indicating that they are evolving to avoid these light traps. 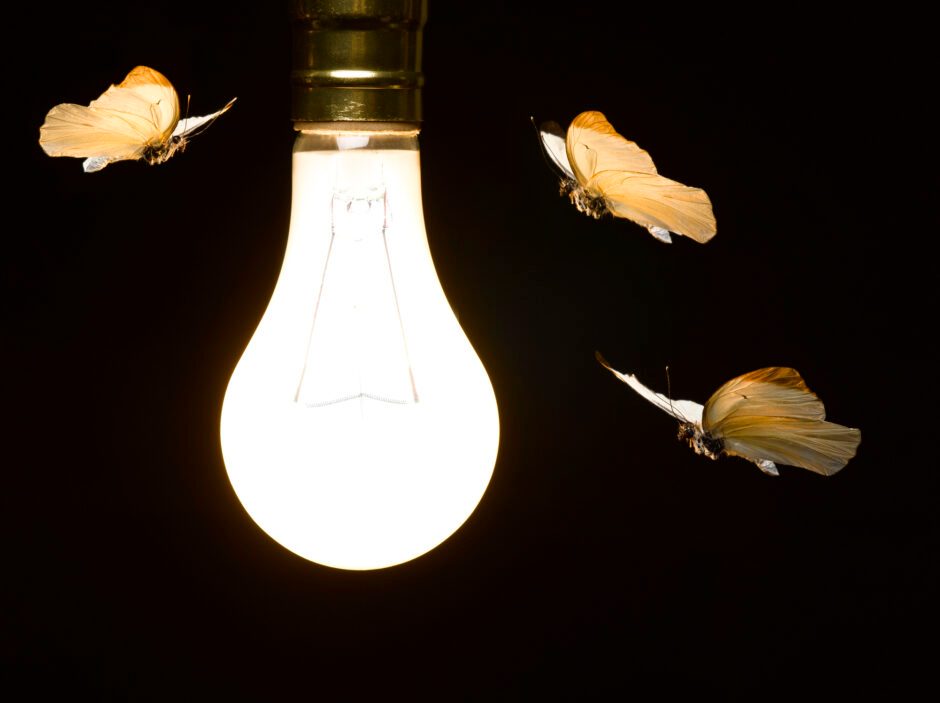 © Getty Images
If you want to limit the fatality of this attraction, consider switching out your lightbulbs to a redder hue. Scientists have found that moths (and other nocturnal insects) are more sensitive to violet and ultraviolet light, but less affected by red light.

Since most butterflies are diurnal (or daytime) creatures, we are yet to observe this behaviour. Butterflies tend to hang themselves upside down under a leaf to sleep at nighttime to rest up for the day ahead.

What do moths eat?

We may not see them hanging around the flowerbeds as often, but moths also drink up the nectar from flowers to keep themselves flying. Like butterflies, moths have a long straw structure for a mouth and get most of their non-sugary nutrients, like proteins and mineral, from the food they ate as caterpillars.

However, scientists have found that moths are picky eaters compared to butterflies. A 2011 study tracked this group of insects, finding that the nocturnal Lepidoptera, mainly moths, drank nectar from fewer plant species than their diurnal neighbours. Researchers suggested that such eating patterns has evolved in relation to the activity of flowering plants, which more regularly emit scents during the day.

If moths can only drink up their food, then how do they destroy clothes? This takes us back to the caterpillar. Although there are ‘cloth moths’, it’s actually their baby moth caterpillars that do the dirty work making holes in your clean clothes.

Why are butterfly and moth wings different colours?

Moths’ dull, dusty wings are not as captivating as the colourful patterns we see on butterflies. However, there are always exceptions like this Luna moth with its eccentric green wings.

The difference in colour arises from the organisation of these tiny scales, some with pigments and others without. Both have wings made of layers of proteins, but many butterflies have scales which are pigmented or reflect light in unique ways to create a pattern.

This is less common for moths, who need essentially pack their wings with these pigmented scales to avoid predators by remaining dull.

“Moths are mostly active at night, so have to conceal themselves in the daytime by camouflage. Wing scales are intrinsically reflective if they are not pigmented, so decolourisation is necessary for moths,” Stavenga explains.

Some moths have even developed noise-cancelling scales that help them hide from bats. These scales effectively absorb sound waves, stopping bats from listening to the echo of sound which reaches moths.

According to Professor Per Henningsson, an evolutionary ecologist researching flying animals: “these arched, broad and short wings are quite inefficient wings, just in terms of aerodynamic efficiency. So you wouldn’t really use those wings, right?”

Yet, his recent studies of their flight in wind tunnels shows that butterflies create a pocket of air just before clapping their wings, which helps to power their flight. Henningsson says that the wings’ broadness and flexibility contribute to the success of this clapping action.

Moths also have an interesting hook-like structure between their wings called a ‘frenulum’ which links the wings together. This is thought to help the wings act as a single surface when the moth is flying through the air, but it’s not clear why the frenulum is missing in most butterflies.

Can moths and butterflies hear sound?

Not only do they have noise-cancelling scales, but moths also have hearing which is tuned to detect bats’ sound waves. This ultrasonic hearing has served them well for millions of years, with moths making up over 90 per cent of all Lepidoptera insects today.

Previously it was thought that moths evolved this special hearing in response to bats’ echolocation method of predation, where they send out sound waves and use the differences in the echoes to find their prey.

In 2019, however, scientists studying moths and butterflies found that this unique hearing had evolved in moths millions of years before echolocating bats.

Now, researchers think they evolved for communication, but mostly monitor their surroundings for any potential predators. As butterflies are day-fliers, they don’t need to hide from bats specifically, but instead have human-tuned hearing.

Butterflies hearing is tuned to hear humans and other diurnal mammals – allowing them to fly away when needed. Some even use their wing veins to help them listen in.

Why are moth and butterfly antennae different?

Apart from their colouring, the most obvious difference between moths and butterflies can be seen in their antennae.

Moths have antennae that look like tiny leaves, with a greater number of olfactory nerve receptors than butterflies. This helps moths sense nutrients and other animals. These antennae are incredible sensors and have even been used in science to develop ‘smellicopters’.

Researchers have attached a live moth antenna to a drone, integrating its sensory cells with their robotic system as it stays biologically active for at least a few hours. They use this to detect toxic fumes from explosions and generate reports on air quality.

Compared to humans and even butterflies, moths have a much more perceptive sense of smell.

“Cells in a moth antenna amplify chemical signals,” said Professor Thomas Daniel, a researcher supervising this work. “The moths do it really efficiently – one scent molecule can trigger lots of cellular responses, and that’s the trick. This process is super-efficient, specific and fast.”

Butterflies have thin antennae which are clubbed at the end like the flat side of a kirby-grip. While they also have sensors which help them smell, butterflies antennae help decide when it’s time to pack up for a holiday.

This club helps butterflies measure the air’s temperature, so they know when it’s time to migrate to warmer climates or go into butterfly hibernation, called diapause.