Shortly before a mass extinction ended the Age of Dinosaurs, a reptilian, barracuda-like carnivore with a mouth like a box cutter patrolled the warm seas that once covered swaths of what is now North Africa. A recently described fossil of the ocean-dwelling beast reveals that its bite was unlike that of any of its relatives, in the water or onshore.

The animal was a mosasaur, an extinct, marine reptile related to snakes and monitor lizards. Mosasaurs commonly had piercing, conical teeth for gripping slippery prey or flat, crushing teeth for smashing hard-shelled animals. But this new variety had short, serrated, squarish blades, packed tightly in series to form a knife’s cutting edge. This mouth of razors is unique among mosasaurs, and even within the entirety of the tetrapod lineage, mostly landlubbing vertebrates that include amphibians, reptiles, birds and mammals.

The discovery, described January 16 in Cretaceous Research, suggests that mosasaurs were evolving experimental physical traits and lifestyles right up until their abrupt extinction 66 million years ago.

Phosphate miners in Morocco found the curious fossil: a chunk of upper jaw studded with teeth. The jaw came from a mosasaur living at the very end of the Cretaceous Period. Many mosasaurs were massive predators, some stretching longer than a school bus. But this fossil belonged to an animal just over a meter long, Nick Longrich, a paleontologist at the University of Bath in England, and his colleagues determined.

Longrich says the animal’s small size is interesting, but that’s not what caught his eye. “Those teeth are just unlike anything I’ve seen in a lizard before,” Longrich says. The team named the mosasaur Xenodens calminechari — Xenodens means “strange tooth;” calminechari is Arabic for “like a saw.”

Longrich says the closest match for X. calminechari’s teeth appear to be those of modern-day dogfish sharks, which can “cut large bolts of flesh out as they scavenge,” he says. “Probably these slicing teeth allowed it to process a huge range of foods,” says Longrich, noting that dogfish sharks use their teeth to chop up everything from fish to sea anemones. Despite its small size, X. calminechari may have been able to prey upon quite large animals or scavenge their remains, since it shared its watery home with big fish and cephalopods, as well as orca-sized, long-necked plesiosaurs. 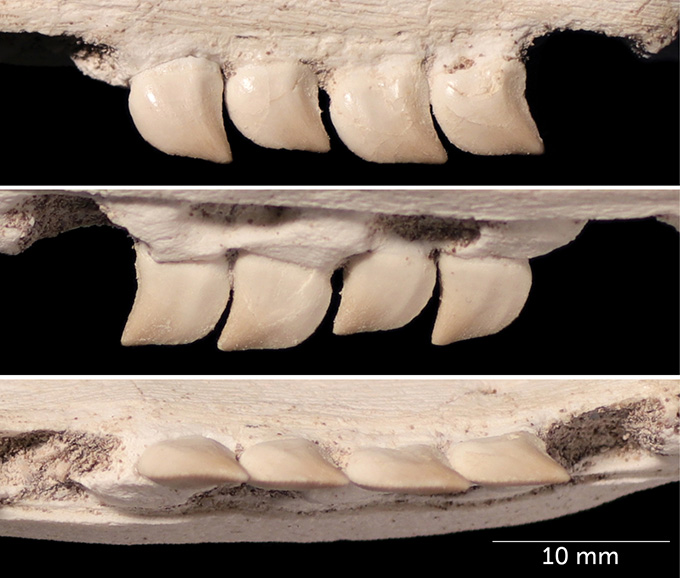 The fossilized jaw of Xenodens calminechari was lined with a battery of cutting teeth similar to razor blades, shown here from the sides (top and middle image) and knife edge (bottom image) of the teeth.Nick Longrich
The fossil is “completely bizarre,” says Paulina Jiménez-Huidobro, a paleontologist at the University of Bonn in Germany not involved with this research, noting the teeth may have been used to “slice and dice” crustaceans, shell and all.

She has doubts about the comparison to shark feeding methods and diet based solely on the tooth shape, though, because of fundamental differences between how sharks and mosasaurs bite prey. Shark teeth cut into flesh on jaws that extend outwards towards prey independently of the skull.

“This mechanism does not occur in mosasaurs, even if Xenodens has a shark-like tooth shape,” Jiménez-Huidobro says. “No lizard can do that.”

For Longrich, X. calminechari’s discovery helps paint a picture of the late Cretaceous’ tropical seas as teeming with biodiversity before a dinosaur-era-ending asteroid hit Earth (SN: 6/17/20). The ocean ecosystem was thriving at the time, so there may have been dozens of mosasaur species in a single habitat, he says, and they weren’t done producing weird prototypes like Xenodens.

“The mosasaurs were still experimenting with new ways of feeding, new morphologies, new lifestyles just before that asteroid came down,” Longrich says.

Learning more about this nimble, barracuda-like sea lizard will reveal more of the evolutionary experimentation going on at the time, but gaining that understand requires the discovery of more fossil material, which could take a while, Longrich says. In half a dozen years of searching, he’s seen only one fossil of this species.

“Eventually something has to turn up, but it’s a waiting game.”

When is David Attenborough’s Life in Colour on TV?

Conservation paradox: The pros and cons of recreational hunting

When is David Attenborough’s Life in Colour on TV?

Conservation paradox: The pros and cons of recreational hunting

Study finds even the common house sparrow is declining