A vaccine developed by Pfizer and BioNTech appears to be effective against the UK variant of COVID-19, according to two lab studies. But experts from the University of Cambridge found that when a mutation, known as E484K, was introduced to the variant, “substantially higher levels of antibody were required” to neutralise the virus.

According to the scientists, their findings, which have not yet been peer-reviewed, suggest the Pfizer/BioNtech coronavirus vaccine may be less effective when dealing with the E484K mutation. It comes following the news of a report from Public Health England which revealed that a handful of cases of the UK variant have been shown to contain this mutation. The E484K mutation was first identified in the South African variant, and it was previously believed to not be present in the UK variant, also known as B.1.1.7.

Researchers at the University of Cambridge’s Institute of Therapeutic Immunology & Infectious Disease (CITIID) and the National Institute for Health Research (NIHR) COVID-19 BioResource, analysed blood samples from 26 individuals between the ages of 29 and 89, who had received their first dose of the Pfizer vaccine three weeks ago.

The team extracted serum, which is the fluid part of the blood that contains antibodies. Antibodies are proteins formed in response to the vaccine that can counteract infection. The serum from each participant was then exposed to lab-made versions of the SARS-CoV-2, the virus that causes COVID-19.

The team found the B.1.1.7 variant required around twice the amount of antibodies to neutralise the virus, when compared to previous versions of the virus without the mutations. When the E484K mutation was added, it required an almost 10-fold increase in the concentration of serum antibody for neutralisation, the researchers said. 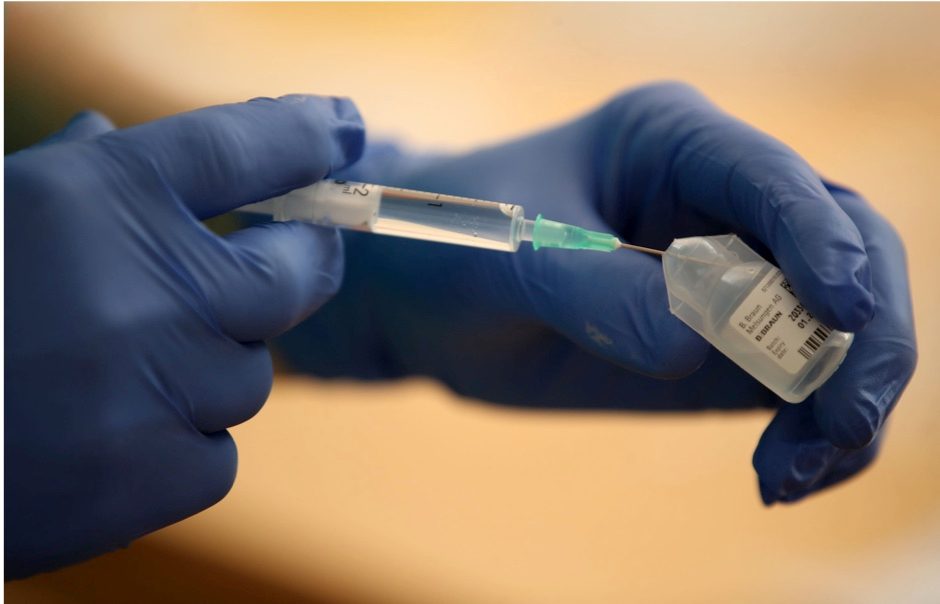 “Our findings suggest that the Pfizer BioNTech vaccine is likely to offer similar protection against B.1.1.7 as it does against the previous strain of SARS-CoV-2. Although we found a reduction in the ability of antibodies to neutralise the virus, given the number of antibodies produced following vaccination, this should still only have a relatively modest effect and people should still be protected,”  said Prof Ravi Gupta, from CITIID, who led the study.

“Of particular concern, though, is the emergence of the E484K mutation, which so far has only been seen in a relatively small number of individuals. Our work suggests the vaccine is likely to be less effective when dealing with this mutation. B.1.1.7 will continue to acquire mutations seen in the other variants of concern, so we need to plan for the next generation of vaccines to have modifications to account for new variants. We also need to scale up vaccines as fast and as broadly as possible to get transmission down globally,” he added.

The findings also suggest delaying the second dose of the Pfizer jab may increase the risk of being infected with coronavirus among some elderly patients. The researchers found that seven people, all over 80, had antibody levels that were insufficient to kill the virus after one dose of the vaccine. It was only after a second dose, given three weeks later, that there were enough antibodies to neutralise the virus.

“Our data suggest that a significant proportion of people aged over 80 may not have developed protective neutralising antibodies against infection three weeks after their first dose of the vaccine. But it’s reassuring to see that after two doses, serum from every individual was able to neutralise the virus,” said Dr Dami Collier, the main co-investigator on the studies.

“Although preliminary and small numbers, this research is important to improving our understanding of the vaccine responses in the most vulnerable age groups,” said Prof Azra Ghani, chair in infectious disease epidemiology at Imperial College London, who was not involved in the studies.

“With the South African variant now in the UK, it will be important to ensure that the most vulnerable groups are fully protected by the second dose. Given the high coverage of first doses that has now been achieved in the first four priority groups coupled with the very strong age-gradient in risk, this would be a good point at which to switch to scheduling second doses alongside continuing the wider roll-out of first doses to the next priority groups,” she added.

Reader Q&A: Why is it more annoying seeing someone wearing a face mask incorrectly than not wearing one at all?

If you wear a mask incorrectly, such as below your nose or with baggy sides, you might as well not be wearing one at all. When we see someone doing this, not only does it mean that the person isn’t protecting those around them, but it naturally makes us worry that they think they are protecting people when they’re not, thus raising the risk of them being complacent about other precautions like social distancing.

What’s more, if we suspect that the person is knowingly wearing their mask incorrectly, this is likely to arouse our deep-seated dislike of cheats – people who try to surreptitiously put their own interests (in this case, their comfort) above those of the wider community.

Will social distancing measures cause coronavirus to evolve into a more deadly strain?